This summer, the City is continuing important work to update the stormwater system (to reduce the possibility of flooding) and update old copper water lines (that are eroding into the soil).

Residents will see these upgrades over the summer months, beginning in May 2022.

Stormwater and catch basin improvements will begin right away, starting in The Cove in May, followed by copper water service replacements in The Cove through August 2022.

During construction, temporary road closures and diversions may occur in certain areas. On occasion, access to driveways and greenspaces may be briefly limited, and some construction noise and street parking restrictions are expected.

“We understand construction and road closures are inconvenient for residents while these upgrades take place,” says Mark Ruault, Senior Municipal Engineer for the City of Chestermere. “However, we ask residents for their patience and understanding over the next few weeks as we work to improve our community’s infrastructure.”

All affected residents will be notified before starting construction with more specific timelines and information on what to expect.

Funded by the Government of Alberta’s Municipal Stimulus Plan grant program, these upgrades will improve the City’s resiliency to future flooding events.

When snow melts or rain happens, stormwater systems collect this water and divert it to stormwater facilities so it doesn’t flood homes. Upgrades to the stormwater mains, catch basins, and overland drainage are necessary to ensure our systems can properly handle significant rain events, function at optimal capacity, and eliminate rainwater pooling on the roads or on private property.

After Chestermere experienced torrential rain in 2015, the City conducted stormwater modelling to examine where systems could be modified or improved. Areas not capable of handling another 1 in 100-year storm event were identified and several are now slated for upgrading.

Stormwater upgrades are expected to take place in the following areas:

Underground copper water service pipes and connections bring clean drinking water from the City’s main supply to the taps in residents’ homes. Approximately 40 existing copper water pipes and connections in the City’s Cove neighbourhood have been identified as needing replacement. Due to the soil condition, the copper pipes have experienced a significantly higher deterioration over time. They will be replaced with a pipe that is resistant to these types of soils called PEX.

The work will mean that connections from the water main to the homeowner’s property line are replaced and will include the curb connection valve at each spot selected.

Residents may see work conducted on the front of their property; however, all work is done on the City of Chestermere’s right-of-way. Should any excavating occur, every effort will be made to restore the site to its original condition.

Affected residents will be notified of any road closures or diversions before any work commences.

The private side of the copper pipe (from the City’s main connection to the home) will not be replaced.

If any deterioration is observed as the upgrades take place, the homeowner will be notified. Although the City of Chestermere will provide information and resources for the homeowner on addressing the issue, it is the homeowner’s responsibility and cost to fix the degraded pipe to their home.

Currently, almost all of the identified connections have been replaced. The project is anticipated to continue into the summer months starting again the week of May 16, 2022, and continuing until the end of August 2022. Copper water service replacements are extending along a portion of East Chestermere Drive, as well as continuing in the Cove.

The following flyers and signage will be posted in affected areas prior to construction. 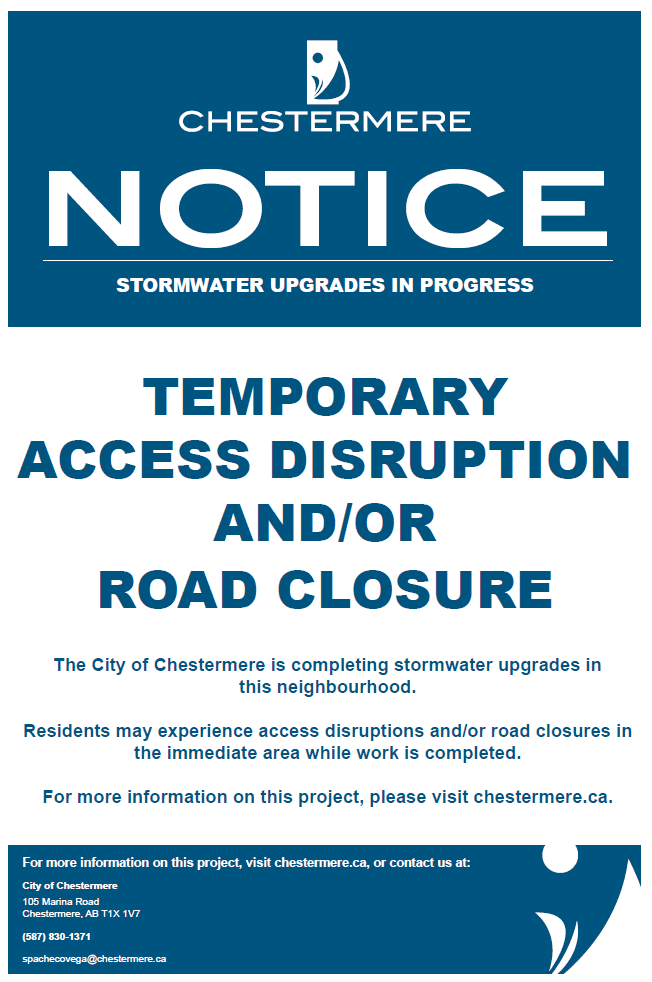 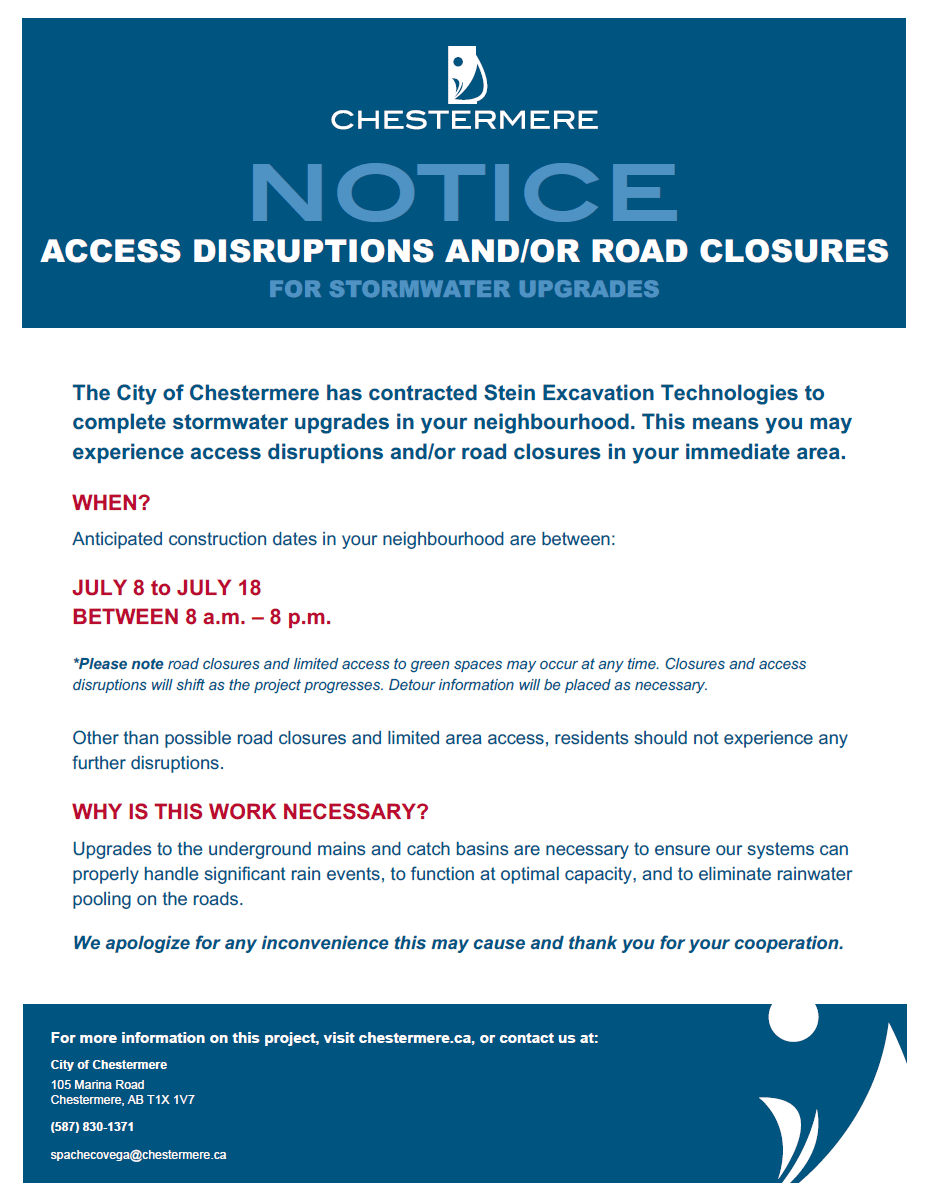