In late 1979/early 1980, the Summer Village of Chestermere Lake Fire Protection Group was started by Wayne Paquette and Roy Berg. The village office located at 156 East Chestermere Drive, which included the 2 bay fire hall was completed in September of 1979. Prior to 1979, the first fire hall was an old shack located at 111 East Chestermere Drive, down by the water, which once served as a first aid station and housed a 1969 Ford with an old gas water pump.


In 1996, an addition to the firehall, would give more space for a small kitchen for the volunteers at the time, an office for the Fire Chief, an area for training, and a floor drain in the hose tower. In the early 2000’s,  an ATCO trailer was added to give firefighters more room. Then a large garage bay was built to house trucks that were being parked outside and often taken out of service due to lack of room. In late 2009, the bay was moved to the public works yard to make room for the new fire hall.


In 2009, the department responded to 864 calls. By this time, planning for a new fire hall was well under way as new fire trucks and staff had more than outgrown the 30 year old, 1485 square foot fire hall including two apparatus bays they were residing in.


In 2011, with grant money from the Alberta Provincial Government, a new 6 bay fire hall was built for the department. Equipped with a training room, large kitchen, and enough room for all the trucks. CFS responds to a variety of calls, each requiring specific apparatus. See below for a breakdown: 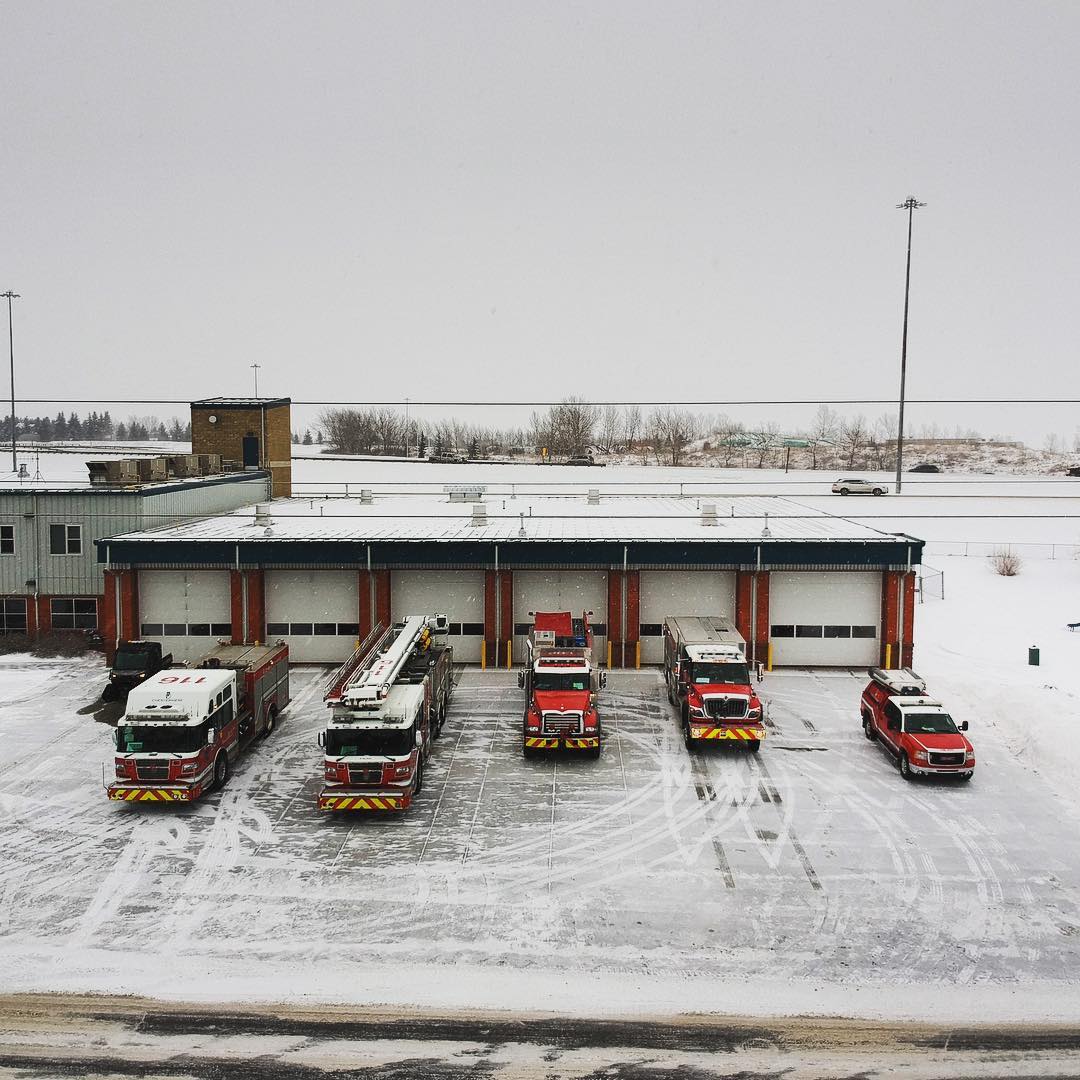 Engine 116 was designed by Chestermere Fire Services to meet the specific needs of the City of Chestermere. This frontline pumper is used to respond to almost all incidents, including structure fires, motor vehicle collisions and medical emergencies.

With a seating capability of five personnel, Engine 116 is always staffed with four fully trained firefighters. Carrying with it ample space for rescue equipment makes Engine 116 a very versatile truck that you will see around the city often. 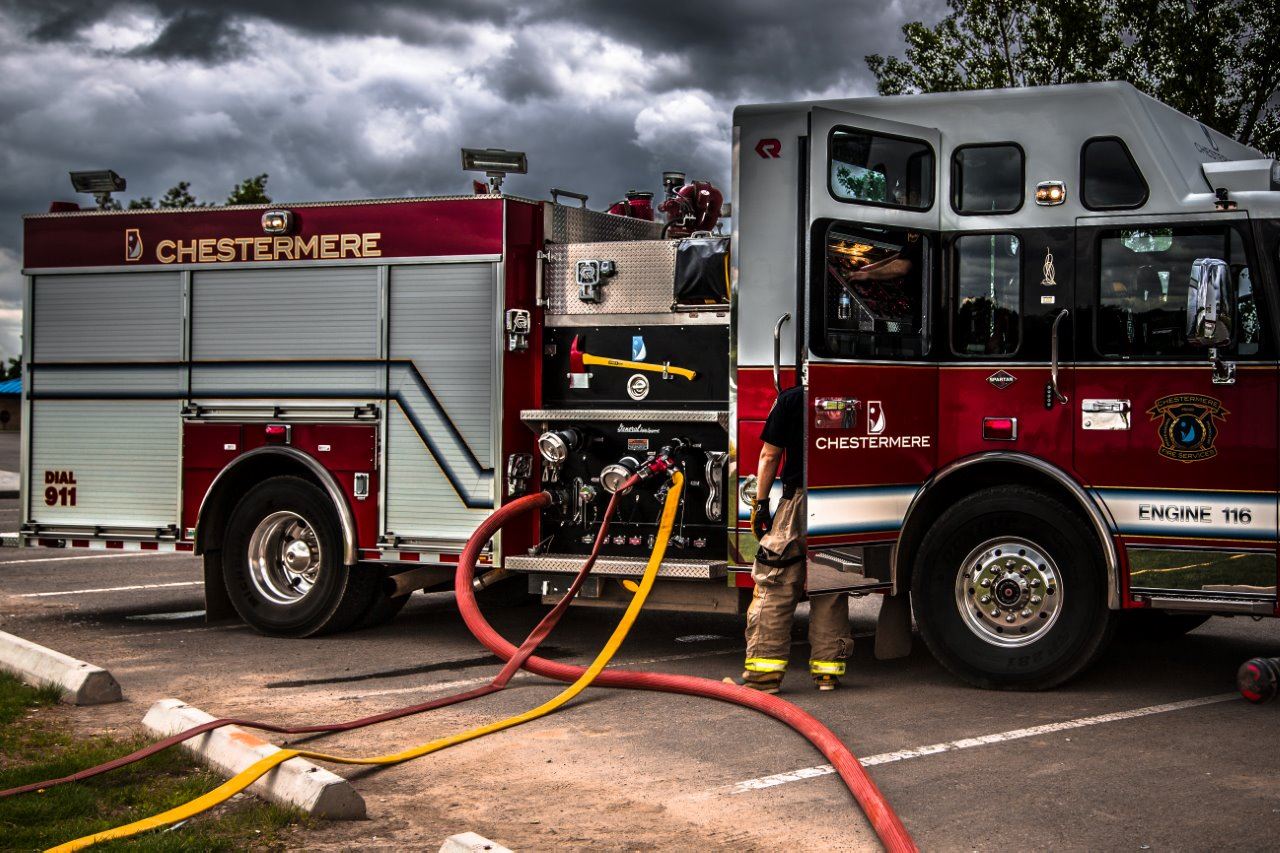 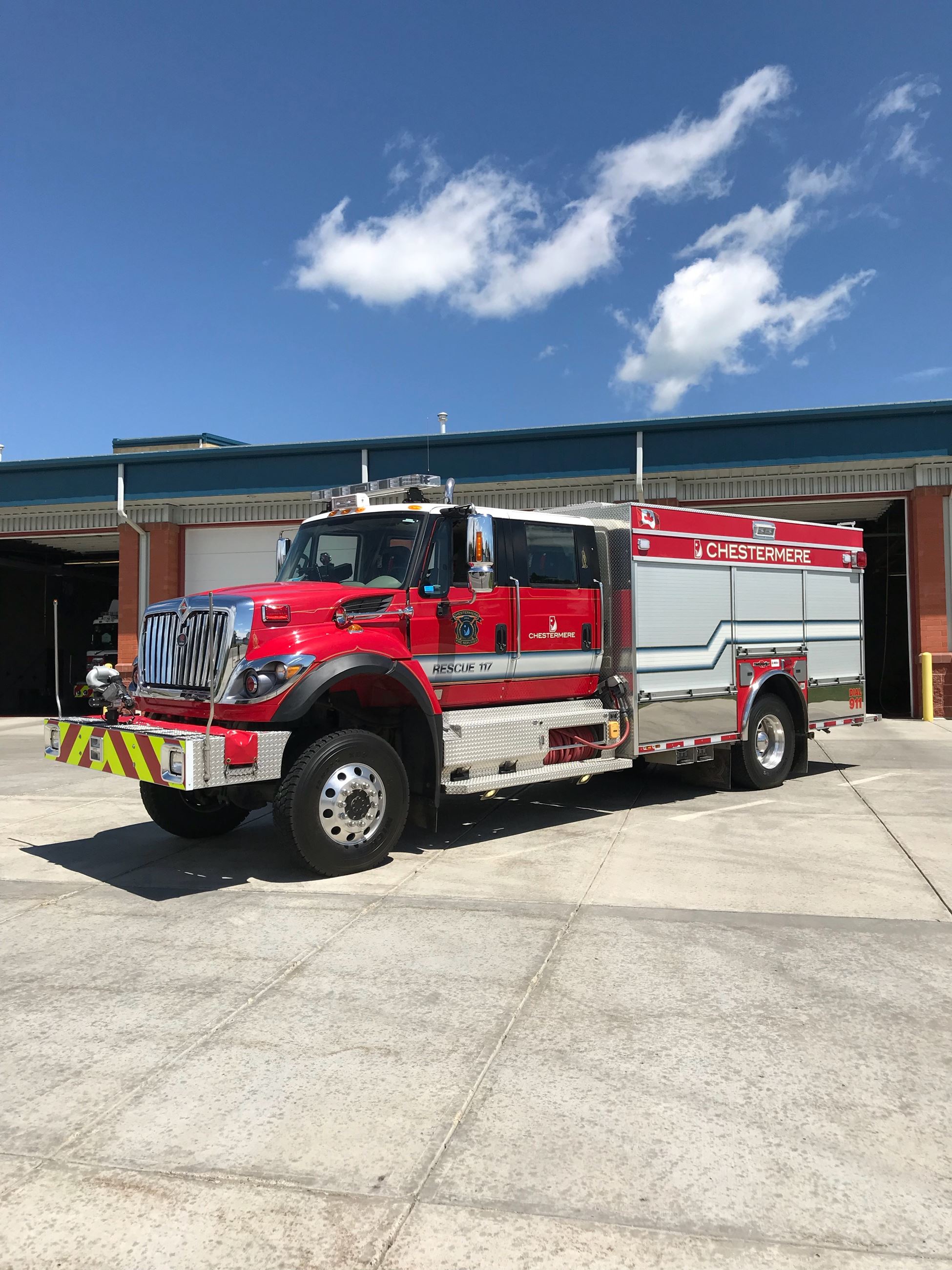 Rescue 117 is the ultimate interface vehicle. The Rosenbauer Timberwolf is designed to meet both the requirements of a Type 1 structural pumper and a Type 3 off-road, wildland, fire-fighting vehicle. Chestermere Fire Services uses Rescue 117 for a variety of emergency incidents, including wild-land fires and motor vehicle collisions. Rescue 117 can seat up to four rescue personnel.

In March 2006, Chestermere Fire Service (formerly Chestermere Fire Rescue) began to consider the benefits of adding an Aerial truck to the department’s fleet of vehicles. Three house fires in 2005/2006 required mutual aid from Calgary Fire Department, which resulted in first-hand observation of what a ladder truck was capable of and the additional safety and protection benefits the fast-growing community of Chestermere could experience.

After calculating the approximate cost of building and maintaining an aerial, CFS presented their request to Chestermere’s Council for budgeting and approval. Council was in agreement for the purchase of an Aerial and applied for some government funding to help cover the cost. Council was awarded a large sum of money as an ‘Infrastructure Grant’ and put about $1 Million towards the purchase.

Aerial 116 was built in the United States with a Spartan chassis and cab in 2007, then shipped off to Germany for the installation of the Metz boom and outriggers in 2008. Finally, it was sent back to the U.S. for Rosenbauer to install the compartment lockers.

Initially, the three best options for the Aerial’s boom manufacturer were Bronto, Metz, and Pierce. Once our department decided that a bi-directional arm would add more versatility to the aerial services, Metz became the manufacturer of choice.

One of the most unique features of Aerial 116 is that it still has a raised roof. Most Aerial trucks have a lowered or indented roof to allow for the boom to drop down into a groove, therefore lowering the profile of the truck. At 12’6”, our Aerial easily fits under the height restrictions of surrounding bridges and clearances and allows for significantly more room inside the cab than you would find in most ladder trucks. 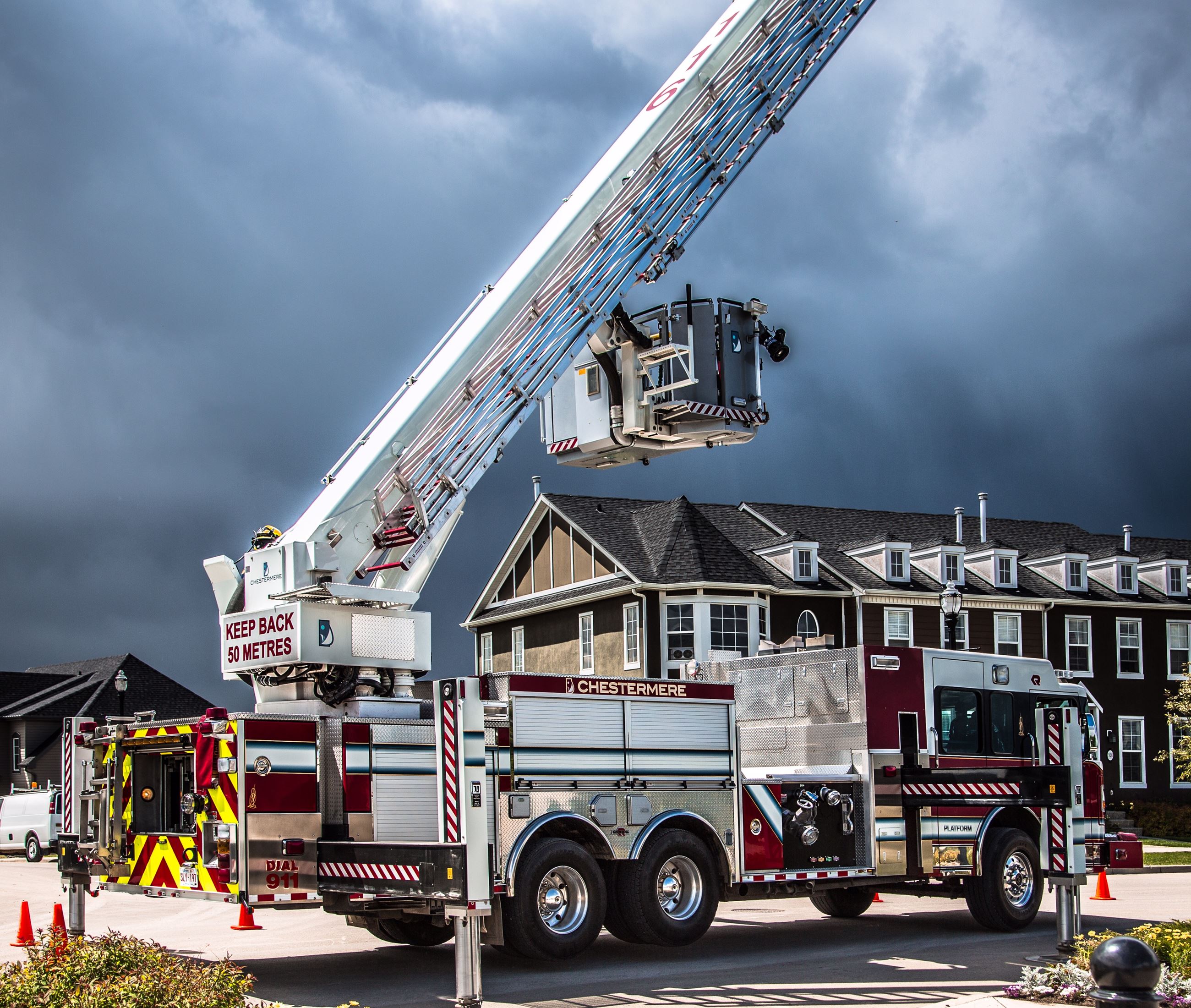 Tender 116 is primarily used in rural fire situations where there is not a hydrant system to deliver water to a fire. This truck is used in combination with other fire departments water tenders to keep a constant water supply at a fire scene.

Another application for Tender 116 is as a secondary truck when responding to motor vehicle accidents as a “Safety Support” truck. This means it is set further back from the frontline Engine to provide a safe working area for the all those involved at an emergency scene. Tender 116 is staffed by two firefighters. 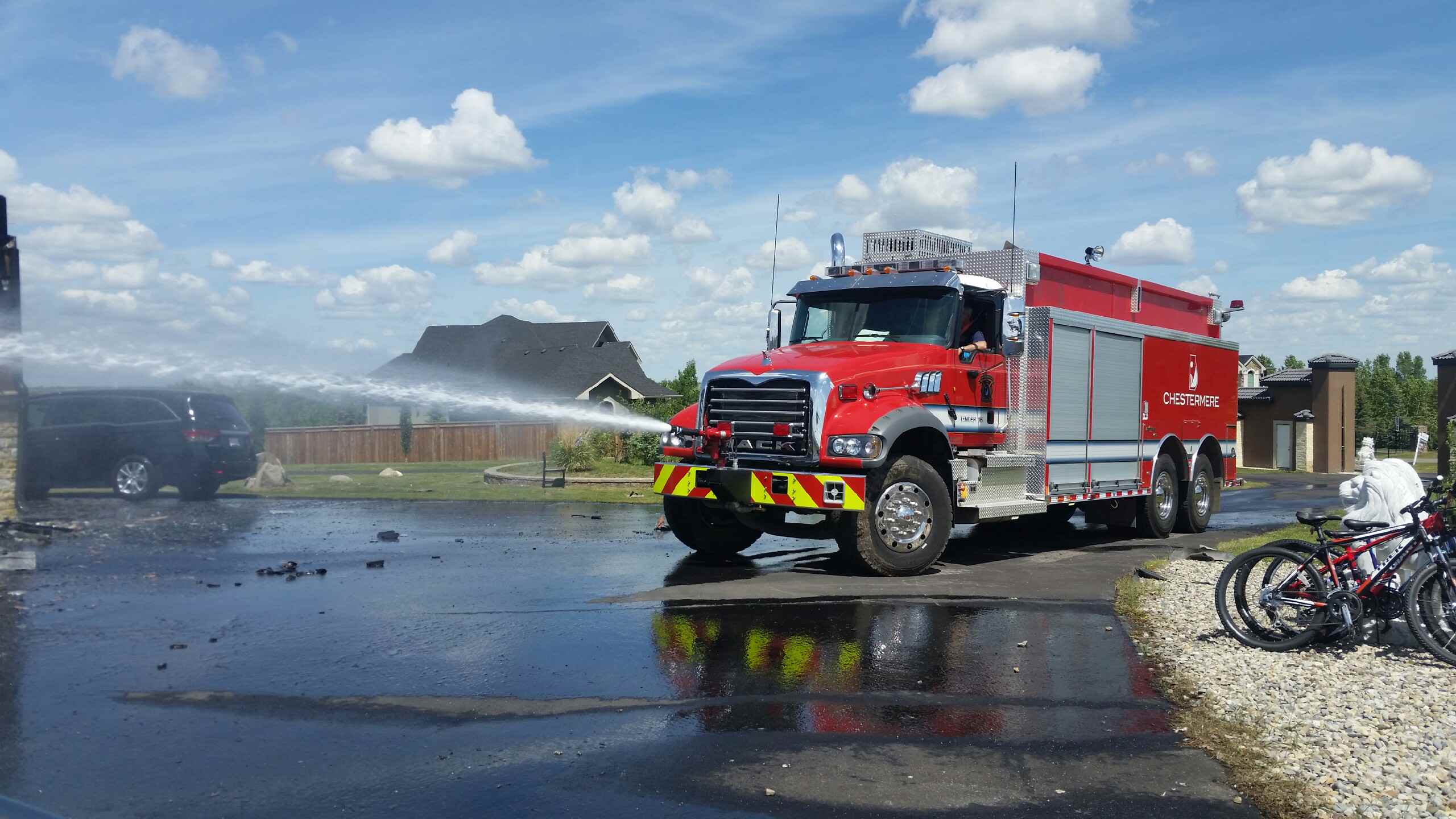 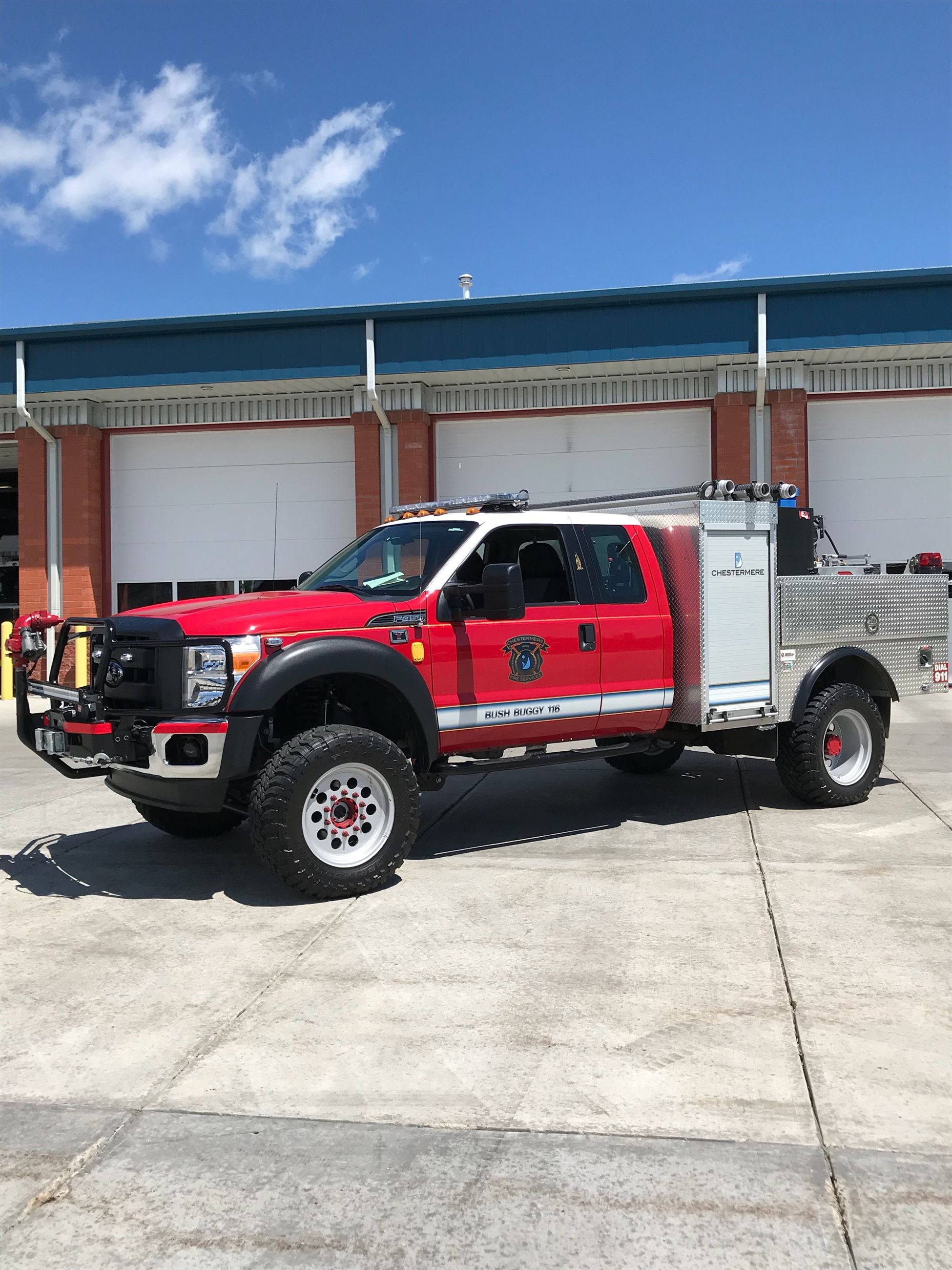 With a 520 GPM high volume pump, a 10 GPM high pressure pump with foam capabilities, and a 250 gallons water tank, the Rosenbauer Busy Buggy delivers the performance to meet the complex challenge of wildland fire-fighting whether stationary or on the move.

Accessing tough terrain, whether day or night, this F450 is fully equipped with 4x4, nighttime illumination, and a winch to aid in recovery.

One of Chestermere Fire Services’ newest additions is Marine 1, a Kanter Marine Lethal Rigid-Hulled Inflatable Boat (RHIB). Designed and constructed to operate under extremely punishing conditions, scores of Lethal RHIBs have been delivered for demanding service in security, patrol, rescue and enforcement roles by many government agencies and private owners.

Each vessel features abundant full depth transverse and longitudinal framing with heavy plating for extreme durability and long service. This allows operators the confidence necessary to push the vessel hard without fear of safety, damage or breakage. Watertight and quick draining decks with below deck buoyancy compartments offer utmost in safety. 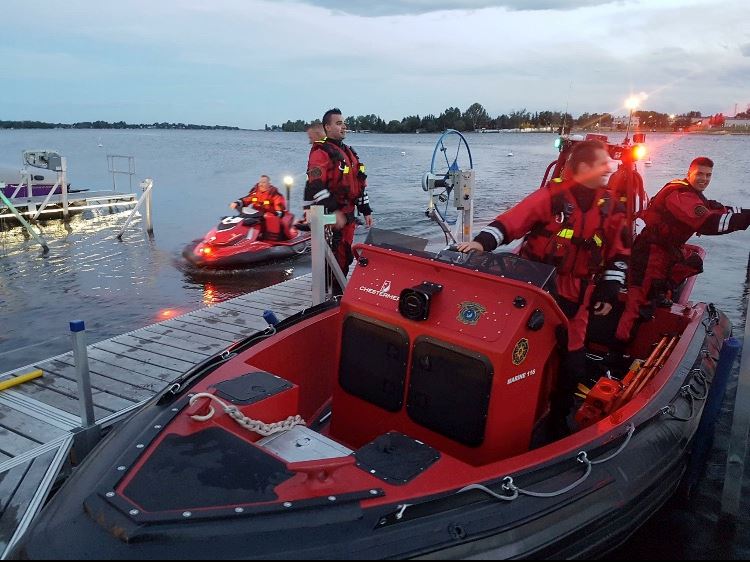 When you’re on a rescue mission, every detail counts. The Sea-Doo Search and Rescue (SAR) watercraft seamlessly combines the features you need to respond to life threatening situations. It is designed for breathtaking rescue performances, from lakes, to flood and other emergency situations. The Sea-Doo SAR excels in rescue missions but is also ideal for evacuation, surveillance and interception. The SAR watercraft truly goes the extra mile. Because when lives are hanging in the balance, every detail counts. 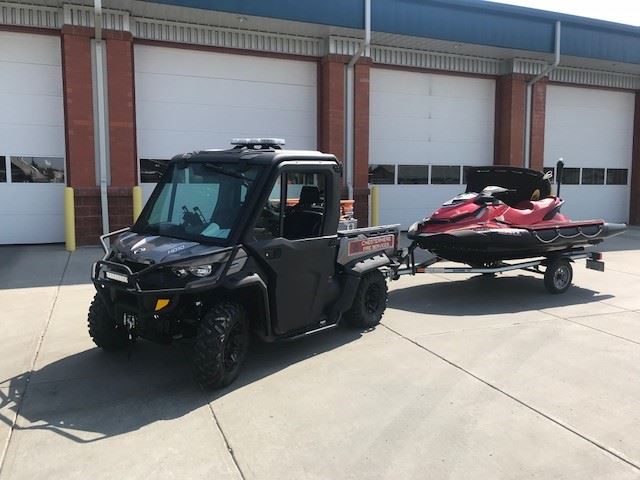 Growth and popularity of recreational activities in the City of Chestermere has necessitated an additional special service vehicle. UTV 116 responds to emergencies in difficult terrain areas and adverse weather events and enhances our abilities for safe patient transport and fire suppression. UTV 116 is a joint venture with Chestermere Peace Officers to enhance their response in difficult to reach areas as well. 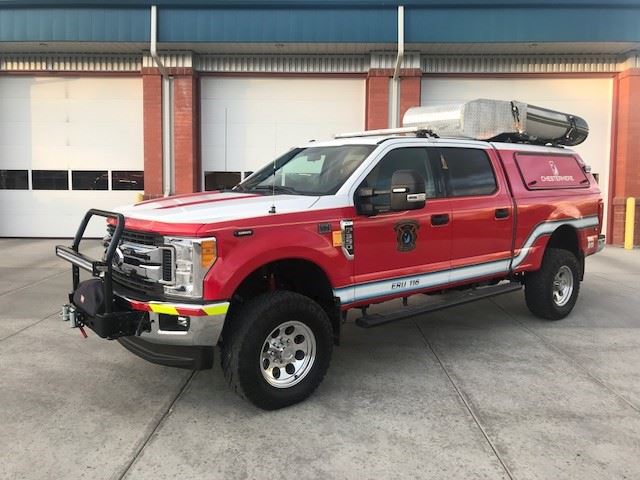 The Emergency Response Unit, or ERU116, is Chestermere Fire Services’ all-purpose vehicle. ERU116 is outfitted with a full array of ice and water rescue equipment, it serves as a rapid response vehicle for medical emergencies, and is used in conjunction with the Command Trailer for large scale incidents. Because of its high wheel base and 4-wheel drive, there are not many places this truck couldn’t go. 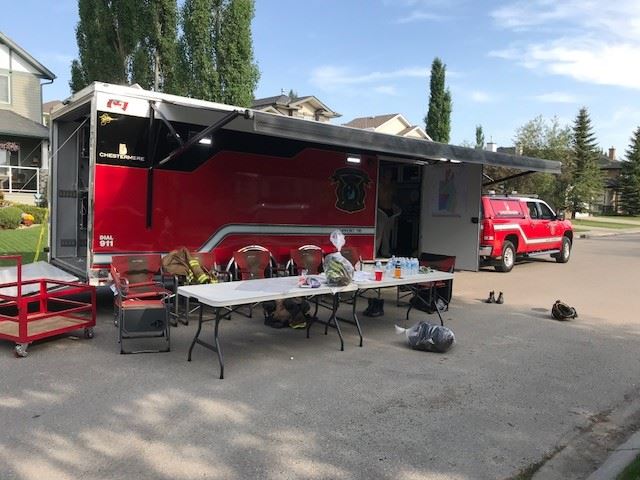 Chestermere Fire’s Command Unit is designed to support fire personnel on any number of emergencies. The Command Trailer is equipped to be a command post on large scale incidents, rehabilitation and shelter for civilians and firefighters, and be a transport unit for UTV116. Equipment includes, but not limited to, maps, heaters, tents, tarps, tables, chairs, portable toilets, decontamination kits, vacuum packs, water, and coffee.

Chestermere’s First Fire Truck was purchased by the Chestermere Cabin Owner’s Association in 1961. The 1952 Ford sat in a shed and was used when needed by the Association as there was no formal fire department in those days. In 1979, the old fire truck was the first unit for the Summer Village of Chestermere Lake Fire Protection Group and used until its retirement in 1981. It was only in retirement for a few years before it was purchased by Jack Meier of Chestermere and converted into a welding truck. In 2011, the old fire truck was generously donated to the Chestermere Historical Foundation by the Meier Family.

Over the last 6 years, the slow process of restoring Chestermere’s first fire truck has been overseen by Vince Young. Many thanks go out to Zane Southgate of Zeebs Performance for donating his time and who is responsible of much of the work, Ken Friesen of Concours Collison for painting at no charge, and fire fighter Keith Burley for finishing the project. This historical truck is currently stored in the fire hall and can be seen at many community events.